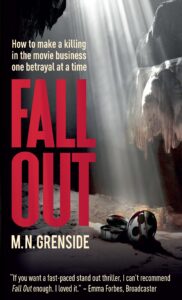 Hi Mark, we are excited to see your thrilling debut Fall Out launch in Malta. Based on a true scandal and written with your knowledge of the movie industry, what can readers expect from this novel?

Firstly, you can expect a late night as I hope you can’t put it down! It’s a fresh look at the thriller genre. In the same way as the late Dick Francis wrote stories with horse racing as the backdrop or John Grisham uses the law, I have used my experience in film and TV to write a thriller with an Entertainment Industry backdrop.

The story starts out with the murder of a successful screenwriter who has just completed his latest script Fall Out, destined to be a huge hit but written with a double purpose. Echoing events from the past, he sends the script to a specific group of people which will change their lives forever. All are connected to a movie that had abruptly stopped shooting in the jungles of the Philippines years before.  It exposes the truth about a conspiracy and murder that led to a half-a-billion-dollar fortune for a select few.

I don’t want to give any more away.  Let’s just say, Fall Out gently lifts the veil on not only how films get made but on the true story of one of the greatest crimes of the last century.

We can only imagine the things you have seen behind the scenes as a Hollywood veteran, having worked in the media for 35 years. Can you tell us about some of your most extraordinary experiences?

Most of the time I was on the road trying to raise the money and put the deals together to fund the shows, so I did not spend a huge amount of time on the actual sets. However, one of the more amusing moments on a set during my time at the Muppets was when we did a special with Michael Jackson.  When Michael arrived, he did not want to speak to Jim Henson who was directing the show but only to Kermit the Frog.

Jim Henson found it very stressful and irksome if he went to a restaurant and people came up to him and his guest assuming he or she would be on the Muppet Show.  I loved cooking so we had a deal… if Jim had special guests and stars he needed to entertain, it was done at my house.  The deal was that I would not charge him for the cooking and he never questioned the wine bill I later claimed on my expenses.  I became a part of some remarkable evenings and met some incredible people.

As for my own productions, when on the set I like to be in the background. However, we were shooting Neverland, the back story to Peter Pan, in the Harbour at Genoa, using the pirate ship Roman Polanski has used on his film Pirates that was anchored there.

We had blue screen around the boat so the special effects in post-production could put in Neverland. However, a group of local bikers kept on revving their bikes and driving up and down the Harbour making a huge noise. Eventually one barged onto the boat and told the Director that for $50,000 they would shut up and let us film without all the noise.

As I was the one who spoke a little Italian, I had to break it to these guys we were not recording sound. We would do that in the studio. Bob Hoskins who was playing Mr. Smee then came up and told them all to “Please take your toys to Neverland.” They looked puzzled.  In his best Long Good Friday voice, he snarled, “Please f*%k off or I’ll cut your balls off!” while waiving his sword. They ran.

What aspect of the media or what specific experience did you enjoy most throughout your career?

Nothing beats the feeling of seeing an idea you had months or even years before realised on the first day of shooting. And friends. I made so many that have remained in my life and many who have visited us here in Malta.

With an impressive career, it is likely you have stumbled upon both successes and failures. Can you tell us about the most important lesson you learnt while working in the media?

I think you will have ups and downs in any endeavour. I learned you must enjoy the ups but get back up when knocked down. And be a doer, not a commentator!

What made you decide it was time to write a book?

To be honest I have been passionate about writing since I was little, but there are two parts to this answer.  The first is I had uncovered a terrific nugget of history on a visit to Asia that I wanted to wrap up in a thriller based in the movie industry.  I wanted to create a world that references so much reality that the reader is never quite sure if what he or she is reading is fact of fiction.

People find the film world is fascinating. If you’ve ever been to a dinner party attended by a lawyer, doctor, dentist, banker, whatever, it’s the producer that usually gets peppered with questions. Based on my history it seemed a logical place to set a franchise of thrillers.  Making movies is by nature a very collaborative business. Much as I enjoyed my time doing it, for once I wanted to create something when I only had to answer to myself.

How do you feel about writing in Malta? Can you give us an insight into your writing process?

I love writing in Malta and my office looks out over the sea. Writing for me is a journey – it’s very different from working on scripts. Each time I sit down to write I only have a vague idea where I am headed. I tried to do a precis for a story and flesh it out but for me it didn’t work. The subconscious seeds ideas that I may not at first recognise until later in the process. Essentially, I want to be as surprised, delighted shocked and puzzled as the reader.

Where can we be guaranteed to find you writing on the island? What are your favourite spots?

Ha! Well mostly I write in my office at home here in Madliena. I like to type (with two fingers only) so I’m usually locked to a desk. I do some thinking while taking the dogs for a walk and late at night in bed, so it’s a bit difficult for others to join me! However, my next book The Bastion will be partly set in Malta so you will see me out and about, especially in Valletta.

How do you spend your time when you are not with your French Bulldogs or family?

Firstly, one of my greatest passions is cooking so my wife and I love entertaining our friends. Diving is my other passion in Malta… I have had a diving license longer than a driving one. In fact, I was certified by the crew of Jacques Cousteau’s Calypso when on furlough in the South of France.

I also love classic cars of the sixties and seventies and keep one here in Malta.  And under normal circumstances my wife and I love to travel. The more remote the better! You never know, it might spark the inspiration for the third book!

And finally, we hear part of the follow-up novel The Bastion will be set in Malta. Is there anything about this you can share with your future readers?

There is in fact an extract of the first three chapters at the end of Fall Out, though none of that is set in Malta. While Fallout gravitated towards the Philippines for the denouement, The Bastion will do so here. However, Malta and its people will come across as I have found them – welcoming, helpful, and friendly… even if the story is fraught with danger! You will certainly recognise some of the locations and you will guess others, even though I have disguised them!